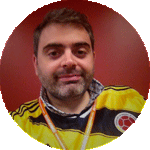 Besides his academic profile, Jose Antonio was selected for an early career grant of Castilla Leon local Goverment to participate in an intership in CGB, an IT company based in Aldeatejada, Salamanca, where he fostered his programming skills. Later, in 2012, he was awarded with an Argo Grant by Spanish Education Ministery, to participate in an international internship program for early career professionals. Between January and October 2012, José Antonio worked as Technology Transfer Officer in CIMNE USA, US branch of CIMNE, the International Center for Numerical Methods in Engineering.

Back to the University of Valladolid he participated in several projects developing instrumentation. Starting with a Raman methodology for the analysis of blood plasma proteome by Raman spectroscopy. Later he acted as Project Manager and coordinator in the development of SuperCam’s Calibration Target, hardware that was delivered by the University of Valladolid to JPL to be included in Perseverance Rover.